* Hair removal or shaving sounds simple enough
* However achieving smooth bare skin is often neither easy nor cheap
* Often there is pain, nicks, cuts, red bumps and ingrown hairs
* Some hair removal methods do not work well
* Some methods are harmful to skin and very expensive
But we can help if you read our hair removal and shaving blog

In our blog below we inform and offer professional advice on safe hair removal, pubic shaving, and body grooming.
We also want to disprove some of the persistent urban legends and old wives tales concerning shaving and skin care.
Scroll down for helpful how to topics, thoughtful advice and hair removal information

Equally important, we will shine a light on some not so safe hair removal methods that salons and TV adverts insist that you "must" have.

How do I get rid of razor bumps? 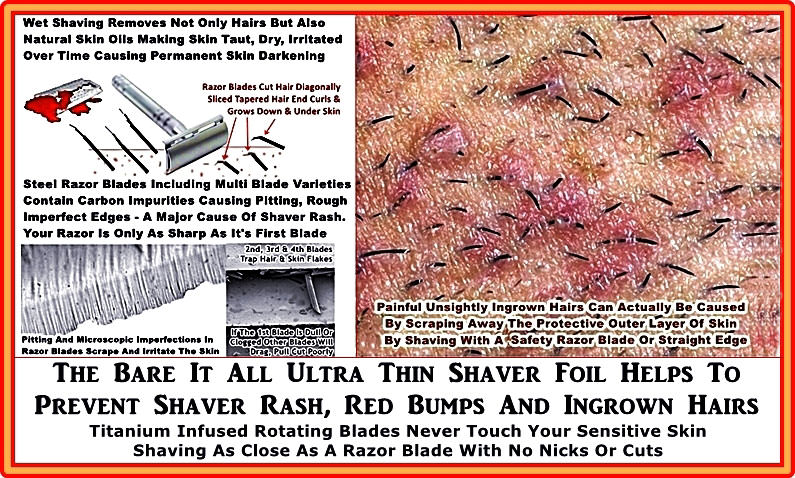 Shaving rash, red bumps & ingrown hairs reported by many people is clinically called pseudo folliculitis barbae. More simply it is the skin getting irritated and asking you to stop wet shaving with any so called safety razor of any brand, because the naked blade scrapes the skin, damaging it and stripping it of its natural oils.

THE CURE: NEVER SHAVE WITH A SO CALLED SAFETY RAZOR.
Then you won’t have to waste money on lathers, lotions, potions and cremes after you have damaged the skin by using a razor blade.
Billions of hard earned dollars are wasted doing exactly this.

Razor blade shaving can also produce changes in skin cell pigmentation which in time results in permanent skin discoloration and darkening e.g. underarms or pubic area. It is a fact that any blade razor or straight edge razor,  scrapes away not only the unwanted hair but also the top layer of your skin called the epidermis, from which your hair grows. This wet shaving with a razor damages the skin and causes the all too familiar, shaver rash and red bumps that millions complain about. The skin is trying to tell you it has been injured and not to shave like this again. Wet razor blade shaving is also the primary cause of painful ingrown hairs.
Also a razor used in the direction of hair growth makes the hair bend and lie down next to the skin and then the blade slices the end of the hair diagonally and not straight across. The thin sliced end then bends inwards and downwards and grows into the skin where it becomes infected. Shaving ”with the grain” in the direction of the hair growth actually trains the hairs to lie down next to the skin making it harder to get at, skin so a smooth shave is progressively harder to achieve.
The razors with hydrating strips are hardly an effective answer for the damage a blade does to the skin. These strips are effective for maybe five shaves cost far too much. Multi bladed shaver cartridges, are only as sharp as the first blade. Once the first blade becomes blunted, the others are pretty much useless and you have to buy yet another expensive blade cartridge, costing well in excess of $100.00, over the course of a year. This does include the lather, shaving lotions and cremes used afterwards to stop the shaver burn.
It is popularly supposed that any ”shaving causes the hair to grow back thicker”. This is an old wives tale brought about by razor blade shaving and has no basis in fact. Any doctor will tell you this supposed increased hair growth is biologically impossible. If it was true, it would be an immediate cheap cure for baldness by simply shaving your head with a razor. This illusion of changed hair growth is caused by wet shaving.The water used during shaving, is absorbed by the skin cells though the process called osmosis and the cells swell up. You will have seen this effect if you stay in the water too long – your skin gets the wrinkled “prune” look. This makes it impossible for a blade to cut the hair close to the skin. Water absorption causes the skin surface to puff up and swollen skin cells ride up the hair shaft, concealing the base of the hair so that the blade cannot reach it to cut it. Once you finish shaving the skin dries out, the skin cells deflate as the water evaporates. This causes the thicker uncut portion of the hair shaft to reappear, making you think that the hair has regrown thicker and faster which it has not.

The safe, effective answer to any body hair removal is to DRY shave with a new , sensitive skin body shavers like the unisex Bare It All personal shaver. Personal electric shavers are NOT THE SAME AS WET RAZOR BLADE SHAVERS – as they have a special single head foil to let the hair be cut without the blades touching or injuring the skin.

You can get “smooth as waxing” skin without the itching, lumps, bumps and ingrown hairs you get with wet shaving. At less than $50.00 you get 500 hours of rechargeable shaving which works out at around 3 cents per shave.
comments powered by Disqus
Follow Personal Shavers's board Hair Removal Methods - The Bare Naked Truth on Pinterest.
Connect With Us

Copyright BestBodyShaver.Com. All Rights Reserved Worldwide. Use of this website and all transactions are subject to the laws of the State of Nevada - USA
3dcart Design by The Cart Designer
Quick View
SSL Certificates